Some of the stuff I have worked on. 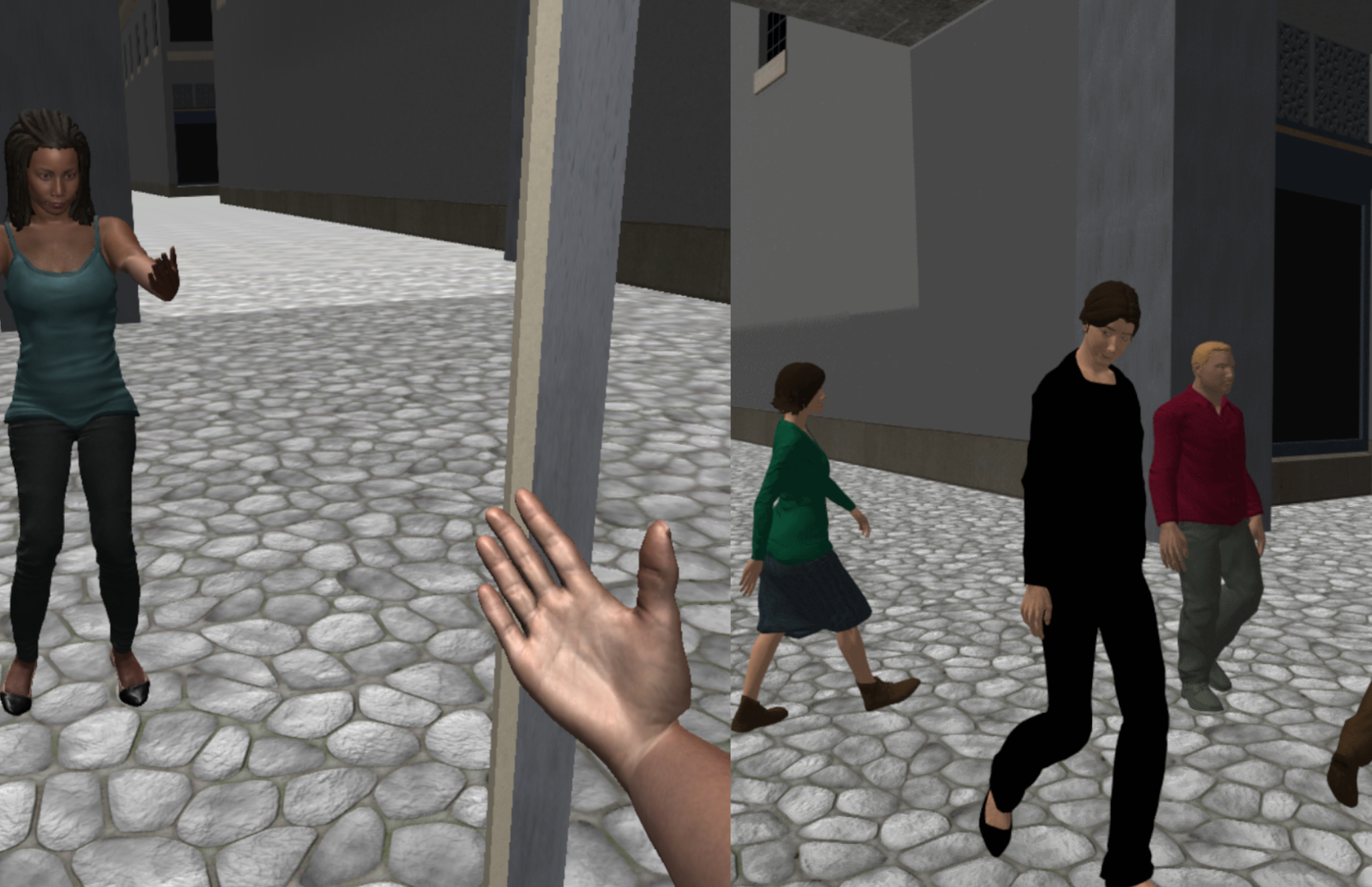 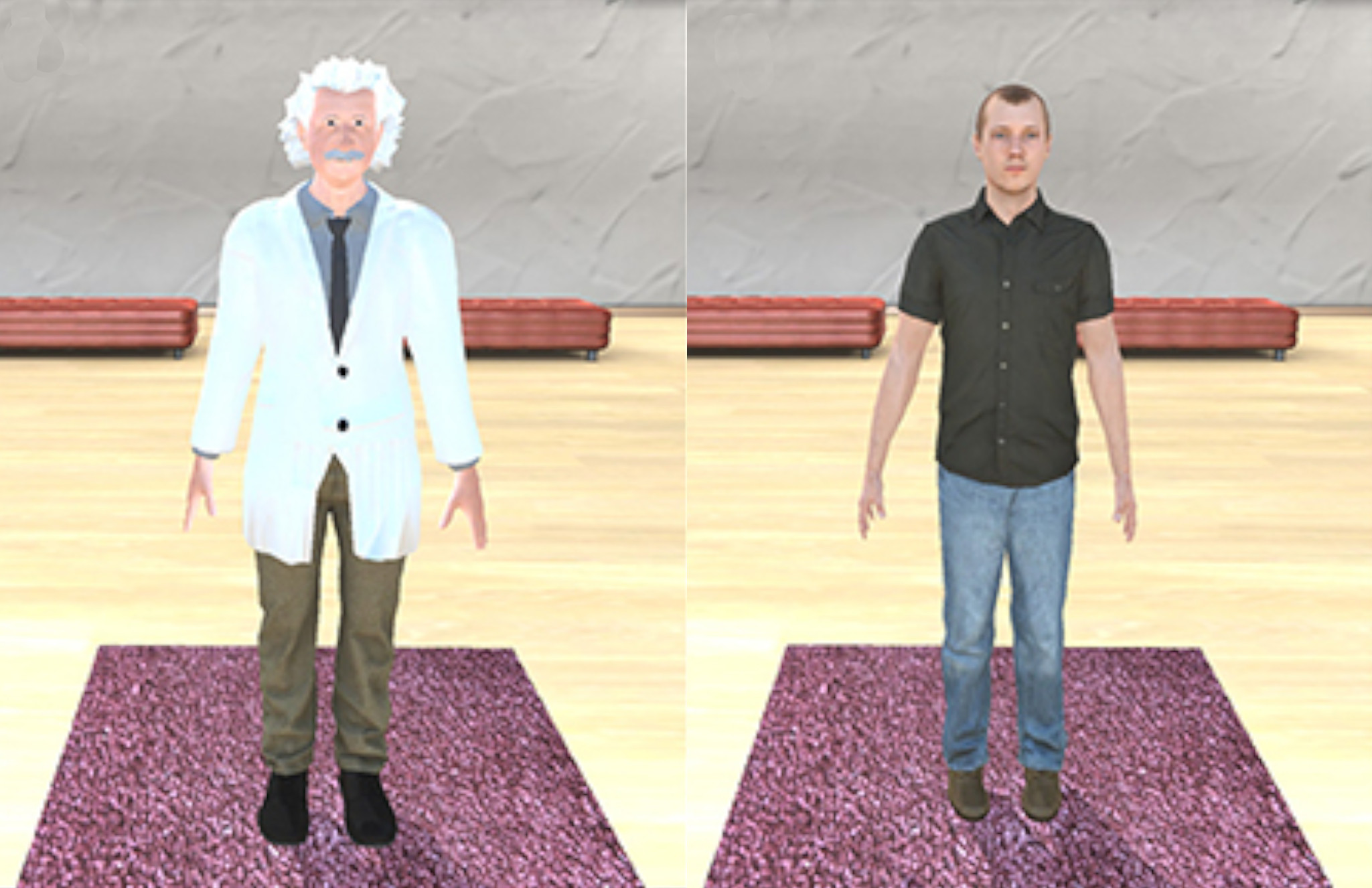 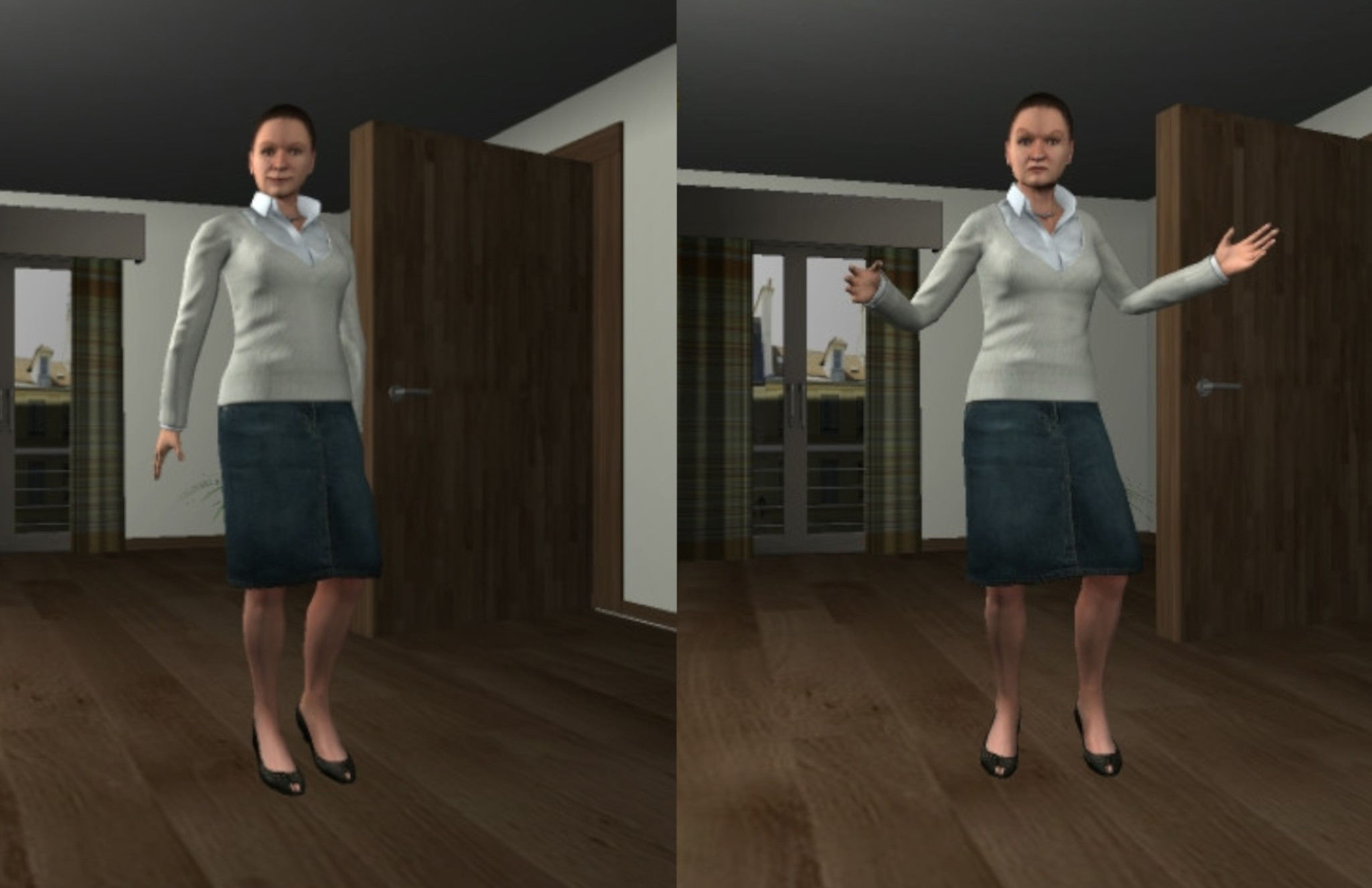 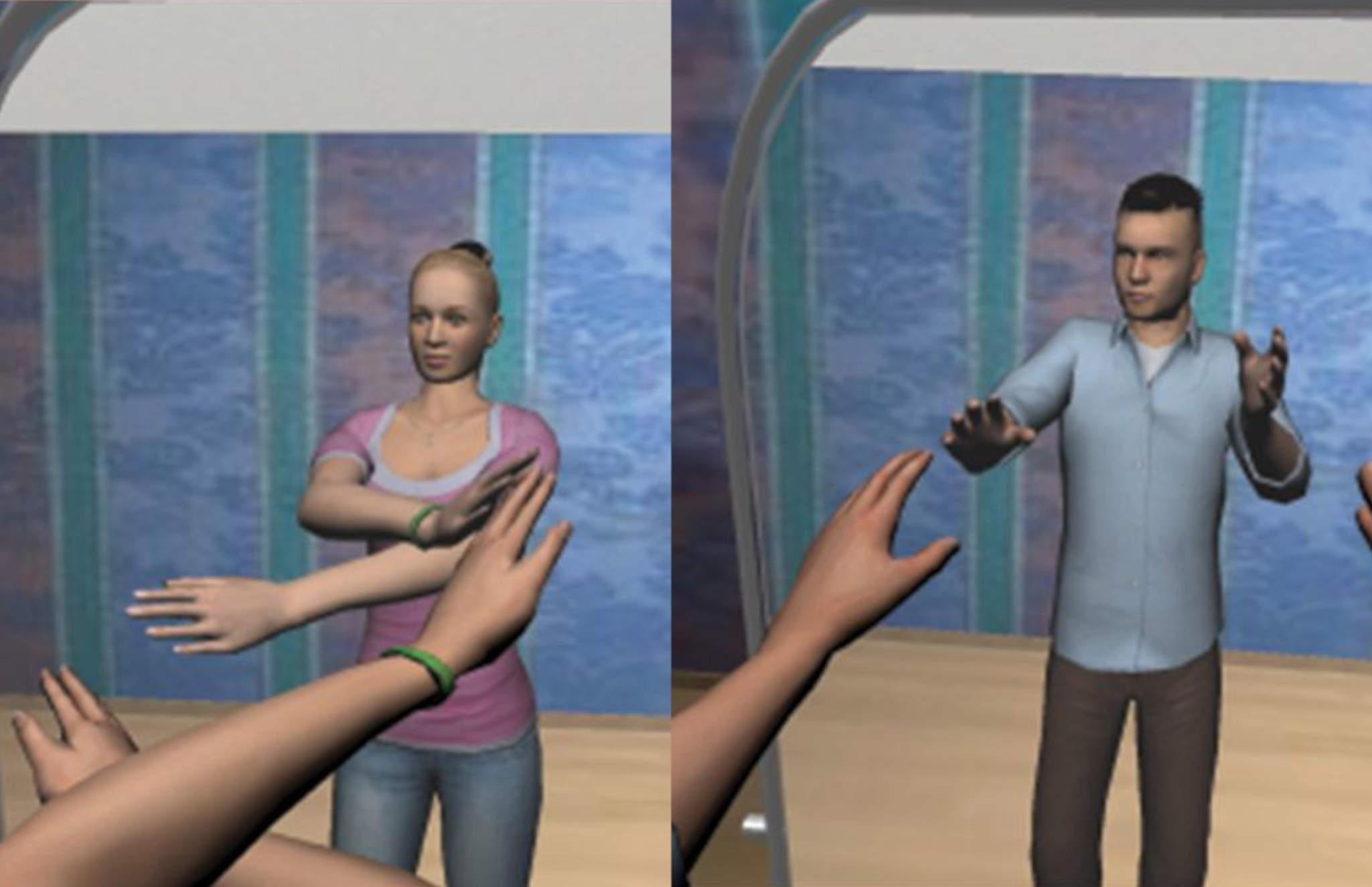 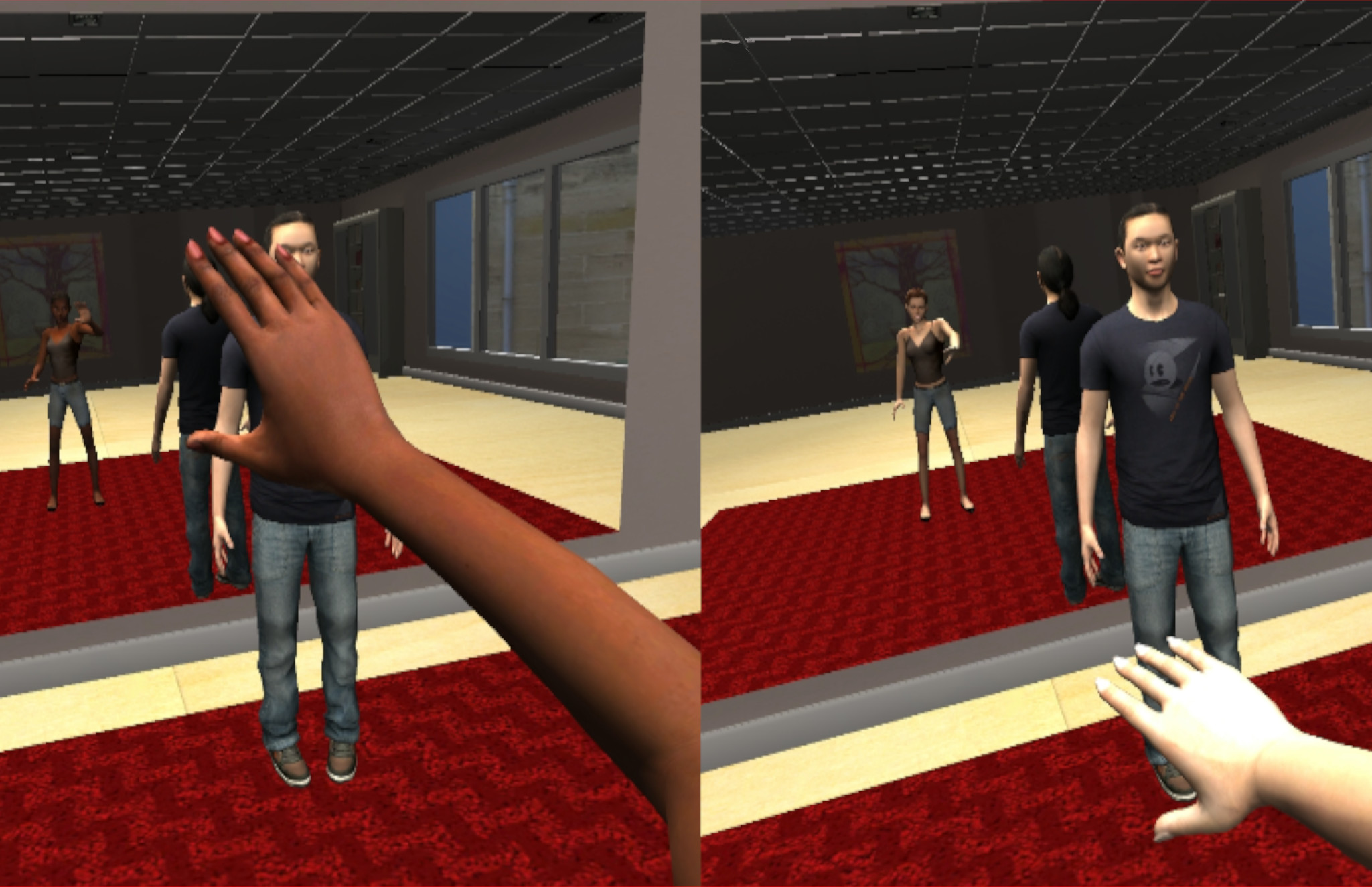 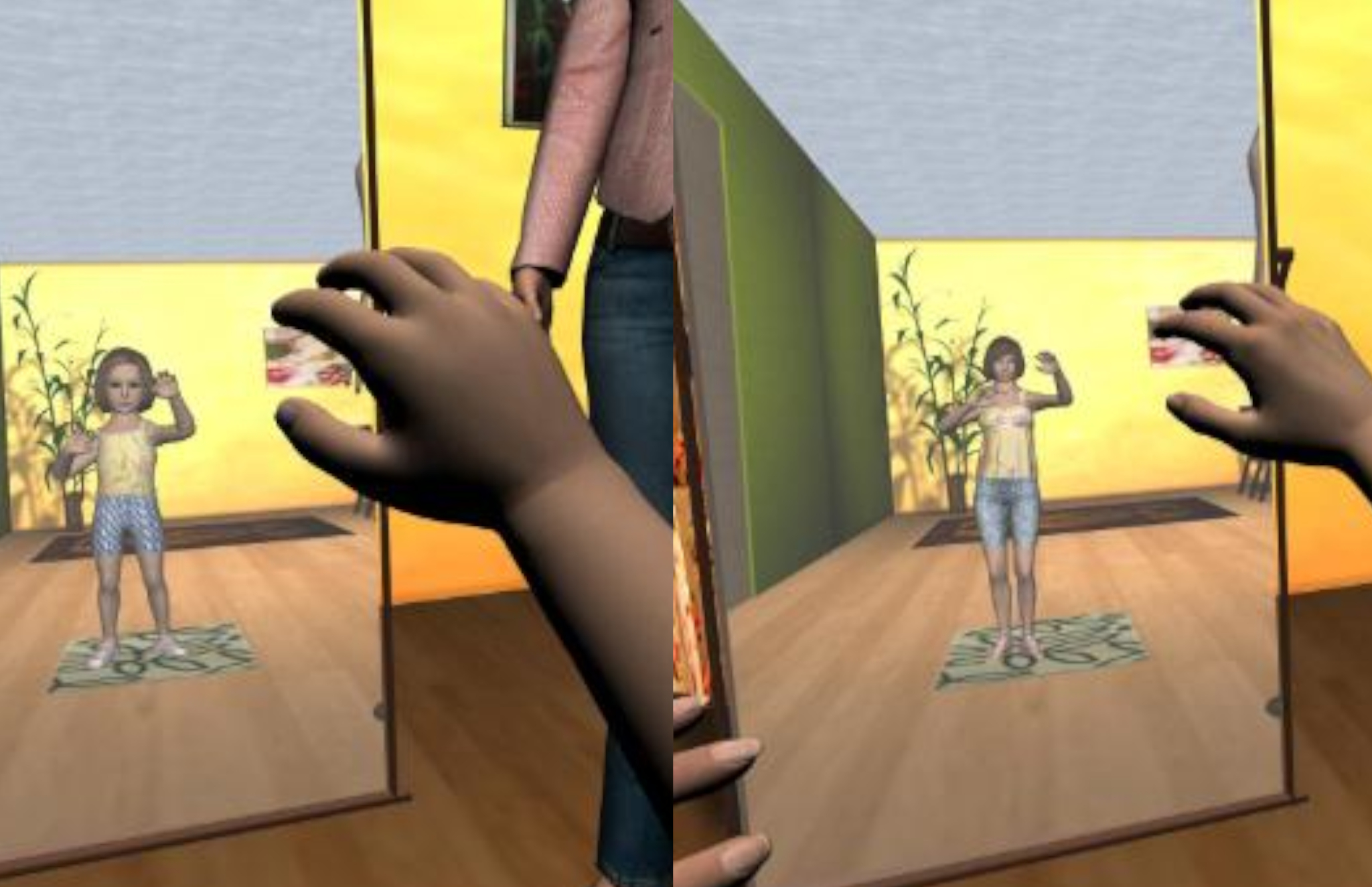 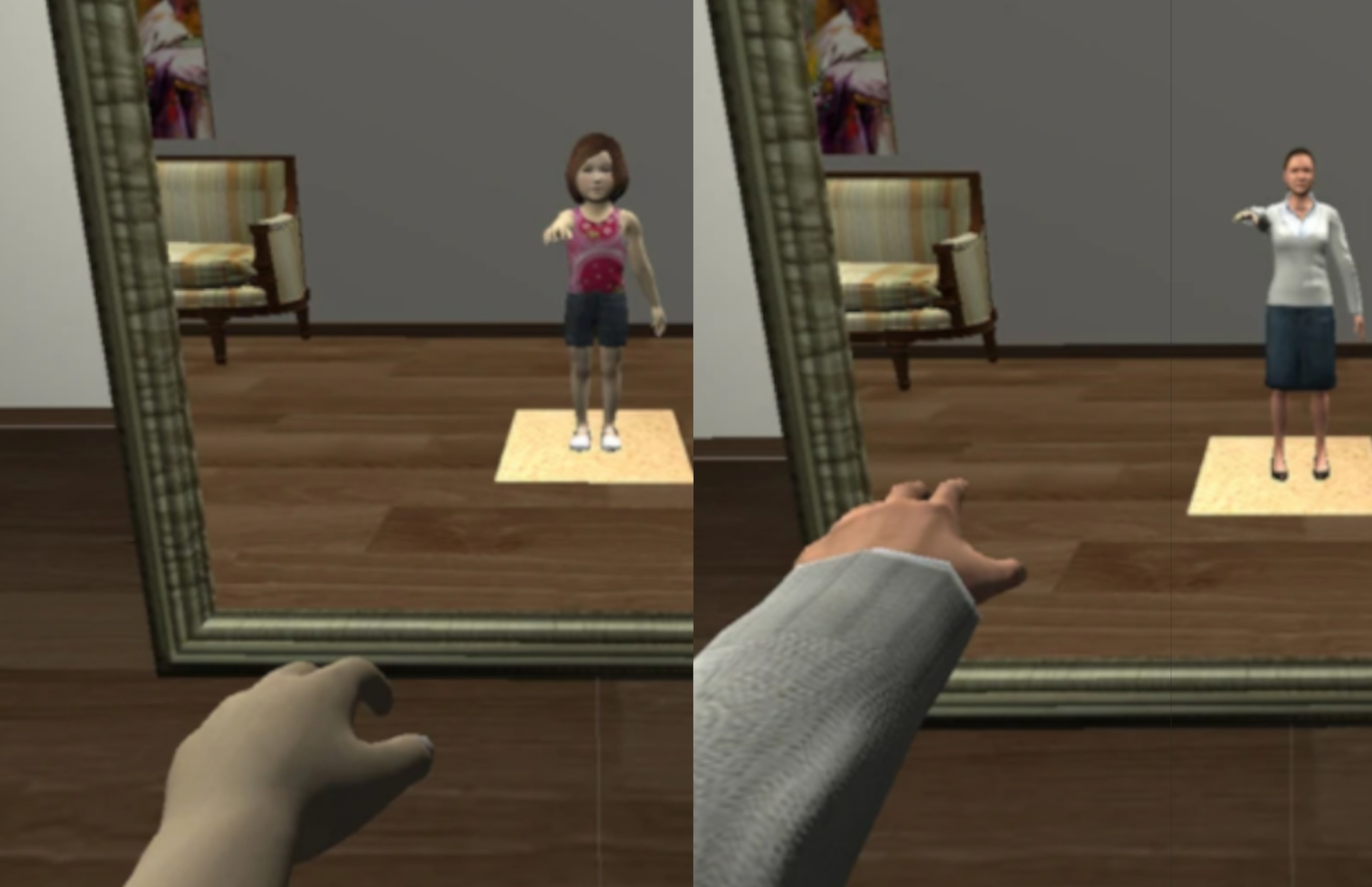 The Sentiment of a Virtual Rock Concert.

A Separate Reality: An Update on Place Illusion and Plausibility in Virtual Reality.

The Golden Rule as a Paradigm for Fostering Prosocial Behavior With Virtual Reality.

The Influence of Embodiment as a Cartoon Character on Public Speaking Anxiety.

Virtual body ownership and its consequences for implicit racial bias are dependent on social context.

The Rocketbox library and the utility of freely available rigged avatars for procedural animation of virtual humans and embodiment.

Exploring the effect of cooperation in reducing implicit racial bias and its relationship with dispositional empathy and political attitudes.

A Virtual Τour of a Hardly Accessible Archaeological Site: the Effect of Immersive Virtual Reality in User Experience, Learning and Attitude Change.

A Mechanistic Account of Bodily Resonance and Implicit Bias.

Virtually Being Einstein Results in an Improvement in Cognitive Task Performance and a Decrease in Age Bias.

Embodiment in a virtual body that speaks produces agency over the speaking but does not necessarily influence subsequent real speaking.

Virtual Embodiment of White People in a Black Virtual Body Leads to a Sustained Reduction in their Implicit Racial Bias.

Computer Based Video and Virtual Environments in the Study of the Role of Emotions in Moral Behavior.

The effects of Avatars’ Gender and Appearance on Social Behaviour in Virtual Worlds.


Abstract
When people hold implicit biases against a group they typically engage in discriminatory behaviour against group members. In the context of the implicit racial bias of ‘white’ against 'black' people, it has been shown several times that implicit bias is reduced after a short exposure of embodiment in a dark-skinned body in virtual reality. Embodiment usually leads to the illusion of ownership over the virtual body, irrespective of its skin colour. Previous studies have been carried out in virtual scenarios that are affectively neutral or positive. Here, we show that when the scenario is affectively negative the illusion of body ownership of white participants over a white body is lessened, and implicit bias is higher for white participants in a black virtual body. The study was carried out with 92 white female participants, in a between-groups design with two factors: BodyType (their virtual body was White or Black) and a surrounding Crowd was Negative, Neutral or Positive towards the participant. We argue that negative affect prevents the formation of new positive associations with black and distress leads to disownership of the virtual body. Although virtual reality is often thought of as an ‘empathy machine’ our results suggest caution, that this may not be universally the case.

Being Einstein in Immersive Virtual Reality.


Abstract
The brain's body representation is amenable to rapid change, even though we tend to think of our bodies as relatively fixed and stable. For example, it has been shown that a life-sized body perceived in virtual reality as substituting the participant's real body, can be felt as if it were their own, and that the body type can induce perceptual, attitudinal and behavioral changes. Here we show that changes can also occur in cognitive processing and specifically, executive functioning. Young male participants were embodied in either a virtual body that signifies super-intelligence (Einstein) or a (Normal) virtual body of similar age to their own. The Einstein body participants performed better on a cognitive task than the Normal body, considering prior cognitive ability (IQ), with the improvement greatest for those with low self-esteem. Einstein embodiment also reduced implicit bias against older people. Hence virtual body ownership may additionally be used to enhance executive functioning.

Abstract
The ability to perspective-take (cognitive awareness of another’s state) and empathise (emotional/affective response) are important characteristics for sensitive, co-operative and constructive parenting, which assists in developing adaptive functioning for children. For the first time, immersive virtual reality was used to place parents in the position of a child in order to assess impact on perspective-taking and empathy. This novel study was conducted with non-high risk Spanish mothers. Mothers were virtually embodied as a 4-year-old child, experienced from the first-person perspective and with virtual and real body movements synchronised. They interacted with a ‘mother avatar’, which responded either in a Positive or Negative way. Participants reported a strong body ownership illusion for the child body that led to cognitive, emotional and physical reactions. Experiencing negative maternal behavior increased levels of empathy. In addition, the Negative mother led to increased feelings of fear of violence. Physiological data indicated greater stress in the Negative than Positive condition. Although further research is required to assess the effectiveness of such methods, any improvement in empathy that leads to a change in parenting behavior has the potential to impact on developmental outcomes for children.

Speaking with your avatar's voice.

Abstract
When we carry out an act, we typically attribute the action to ourselves, the sense of agency. Explanations for agency include conscious prior intention to act, followed by observation of the sensory consequences; brain activity that involves the feed-forward prediction of the consequences combined with rapid inverse motor prediction to fine-tune the action in real time; priming where there is, e.g., a prior command to perform the act; a cause (the intention to act) preceding the effect (the results of the action); and common-sense rules of attribution of physical causality satisfied. We describe an experiment where participants falsely attributed an act to themselves under conditions that apparently cannot be explained by these theories. A life-sized virtual body seen from the first-person perspective in 3D stereo, as if substituting the real body, was used to induce the illusion of ownership over the virtual body. Half of the 44 experimental participants experienced virtual body movements that were synchronous with their own movements (sync), and the other half asynchronous (async). The virtual body, seen in a mirror, spoke with corresponding lip movements, and for half of the participants this was accompanied by synchronous vibrotactile stimulation on the thyroid cartilage but this was not so for the other half. Participants experiencing sync misattributed the speaking to themselves and also shifted the fundamental frequency of their later utterances toward the stimulus ice. Synchronous vibrotactile stimulation also contributed to these results. We show that these findings can be explained by current theories of agency, provided that the critical role of ownership over the virtual body is taken into account.

Embodying a Black virtual body leads to a sustained reduction in racial bias.

Abstract
Virtual reality can be used to visually substitute a person's body by a life-sized virtual one. Such embodiment results in a perceptual illusion of body ownership over the virtual body. Previous research has shown that the form of the virtual body can influence implicit attitudes. In particular, embodying White people in a Black virtual body is associated with an immediate decrease in their implicit racial bias against Black people. We tested whether the reduction in implicit bias lasts for at least 1 week and whether it is enhanced by multiple exposures. Ninety (90) female participants where the virtual body was either Black or White. Participants were required to follow a virtual Tai Chi teacher who was either Asian or European Caucasian. Each participant had 1, 2, or 3 exposures separated by days. Implicit racial bias was measured 1 week before their first exposure and 1 week after their last. The results show that implicit bias decreased more for those with the Black virtual body than the White. There was also some evidence of a general decrease in bias independently of body type for which possible explanations are put forward.

Experiencing being a child in Virtual Reality.

Abstract
An illusory sensation of ownership over a surrogate limb or whole body can be induced through specific forms of multisensory stimulation, such as synchronous visuotactile tapping on the hidden real and visible rubber hand in the rubber hand illusion. Such methods have been used to induce ownership over a manikin a virtual body that substitute the real body, as seen from first-person perspective, through a head-mounted display. However, the perceptual and behavioral consequences of such transformed body ownership have hardly been explored. Immersive virtual reality was used to embody 30 adults as a 4-y-old child, and as an adult body scaled to the same height as the child, experienced from the first-person perspective, and with virtual and real body movements synchronized. The result was a strong body-ownership illusion equally for child and scaled-down adult. Moreover there was an overestimation of the sizes of objects compared with a nonembodied baseline, which was significantly greater for the child condition compared with the scaled-down adult condition. An implicit association test showed that being in a child's body resulted in significantly faster reaction times for the classification of self with child-like compared with adult-like attributes. A second experiment with an additional 16 participants extinguished the ownership illusion by using visuomotor asynchrony, with all else equal. The size-estimation and implicit association test differences between child and scaled-down adult were also extinguished, demonstrating perceptual and behavioral correlates of body-ownership illusions that occur as a function of the type of body in which embodiment occurs.

The embodiment illusion depends on the voice feedback being congruent with the age of the virtual body.

Abstract
People’s mental representations of their own body are malleable and continuously updated through sensory cues. Altering one’s body-representation can lead to changes in object perception and implicit attitudes. Virtual reality has been used to embody adults in the body of a 4-year-old child or a scaled-down adult body. Child embodiment was found to cause an overestimation of object sizes, approximately double that during adult embodiment, and identification of the self with child-like attributes. Here we tested the contribution of auditory cues related to one’s own voice to these visually-driven effects. In a 2 × 2 factorial design, visual and auditory feedback on one’s own body were varied across conditions, which included embodiment in a child or scaled-down adult body, and real (undistorted) or child-like voice feedback. The results replicated, in an older population, previous findings regarding size estimations and implicit attitudes. Further, although auditory cues were not found to enhance these effects, we show that the strength of the embodiment illusion depends on the child-like voice feedback being congruent or incongruent with the age of the virtual body. Results also showed the positive emotional impact of the illusion of owning a child’s body, opening up possibilities for health applications.